When I first think of ‘Chinglish,’ I imagine a language that uses both English and Chinese words to communicate, but a recent article from the NewYork Times discusses ‘Chinglish’ as a language incorporating culture (and not just words), specifically in relation to signage in order to accomodate foreigners’ visit to the Shanghai World Expo.

“The purpose of signage is to be useful, not to be amusing,” said Zhao Huimin, the former Chinese deputy consul general to the United States who, as director general of the capital’s Foreign Affairs Office, has been leading the fight for linguistic standardization and sobriety.

I agree signage should be useful, but if it’s understandable and able to incorporate a bit of culture, it makes for an interesting insight:

Oliver Lutz Radtke, a former German radio reporter who may well be the world’s foremost authority on Chinglish, said he believed that China should embrace the fanciful melding of English and Chinese as the hallmark of a dynamic, living language. As he sees it, Chinglish is an endangered species that deserves preservation.

“If you standardize all these signs, you not only take away the little giggle you get while strolling in the park but you lose a window into the Chinese mind,” said Mr. Radtke, who is the author of a pair of picture books that feature giggle-worthy Chinglish signs in their natural habitat.

While park signs in the West exhort people to “Keep Off the Grass,” Chinese versions tend to anthropomorphize nature as a way to gently engage the stomping masses. Hence, such admonishments as “The Little Grass Is Sleeping. Please Don’t Disturb It” or “Don’t Hurt Me. I Am Afraid of Pain.”

Mr. Yao read off the Chinese equivalents as if savoring a Shakespearean sonnet. “How lovely,” he said with a sigh.

Here’s an example, I think this sign is supposed to say “non-recyclable”…? 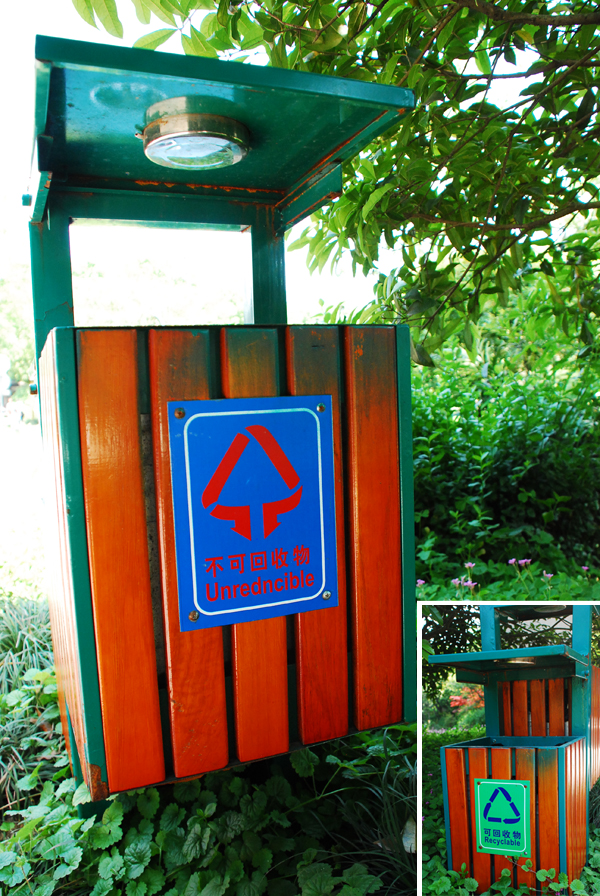 But typo’s are certainly different than mis-translations, for instance, the other day I didn’t get a photo, but saw a sign in a parking lot that warned visitors to “take care of your valubies” (valuables).

“Some Chinglish expressions are nice, but we are not translating literature here,” he said. “I want to see people nodding that they understand the message on these signs. I don’t want to see them laughing.”

One thought on “Chinglish”