Canada, where hockey is life.. or something like that. I’m off for my first full day in Vancouver! 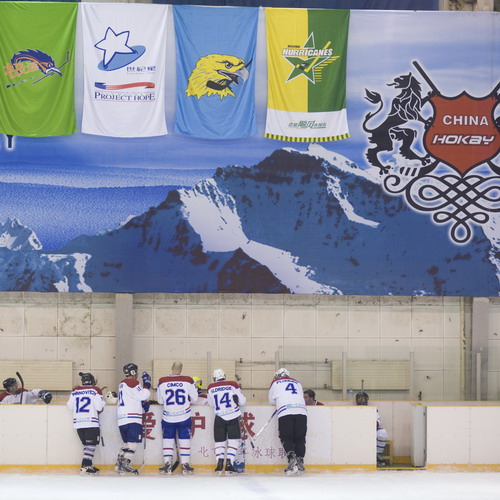 In the mean time, check it out: Beijing has a hockey league. Too bad it looks like it’s only men’s…? Oh, I do miss skating! Sounds like they’re pretty good, playing in tournaments all over the world. I’ll have to make my way to watch a game or two once I arrive.

The league began as a series of pick-up games organized by the Canadian embassy in the early ’90s. “It would be Canada versus the World, and then the Chinese team would come and some of us would stay behind and play against them as well,” explains Plummer. In 2005, a more formal league was born, which now has 110 players on six teams, including about 50 Canadians, 20 Americans, and a handful of Finns, Russians, Chinese, Swedes, plus the odd Kiwi or Brazilian. Each team plays once a week, on Thursday or Sunday night.

The league once tried to involve the local community more, but largely keeps to themselves these days. “I forget where I read it, but in China, there’s more pandas than hockey players,” says Plummer. “We’re not trying to be a trailblazer anymore. We tried to do that and just kind of got frustrated with the politics in China. Now we just kind of do our own thing and provide a fun experience for the expats in Beijing – we don’t take it too seriously.”

One thought on “ice-hockey in Beijing”